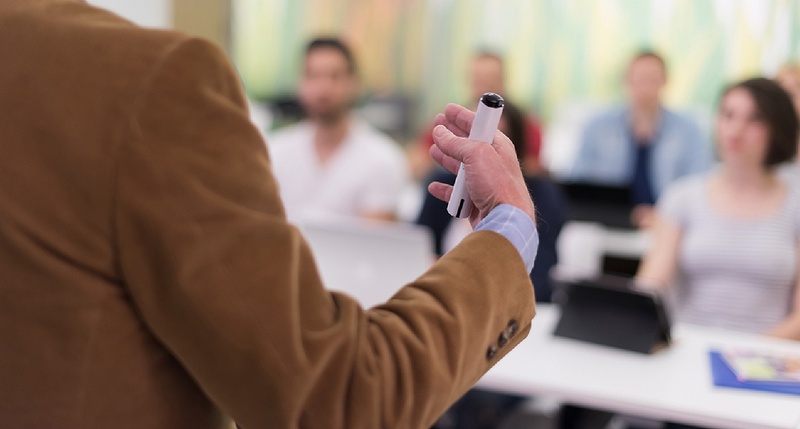 David Hilbert was a prolific German mathematician whose expertise and influence carried over two centuries. As the mathematics department chair at the University of Göttingen, Hilbert was responsible for propelling the careers of brilliant students such as Emmy Noether, Bernard Riemann, and John Von Neuman. He was also responsible for establishing a formidable physics department at the university, setting the stage for three future Nobel Prize winners to build the foundations for their own accomplished careers. Read on to learn more about the mathematician whose work influenced many of the greats we know today!

David Hilbert was born in Königsberg, Prussia, to a city judge father and a mother who studied philosophy and astronomy. Though the city is now Kaliningrad, Russia, it was once a German territory. Like many other mathematicians, David Hilbert showed his extraordinary gift for mathematics and languages at a young age.

In 1872, he studied at Friedrichs College Gymnasium and graduated seven years later from Wilhelm Gymnasium. He promptly enrolled in the University of Königsberg's mathematics program to pursue his passion for solving complex problems. While there, he met a shy but highly bright fellow student named Hermann Mikowski, who would become his lifelong best friend. Together, they collaborated with a newly-arrived professor from the University of Göttingen, Adolf Hurwitz. The three would continue to influence each other's work and careers over the next several years.

Portrait of David Hilbert by an unknown author in in 1970, via Wikipedia

Hilbert received his doctorate in 1885 and chose to pursue teaching at a gymnasium. Naturally, he passed the state exam with flying colors. At the same time, he attended courses on plane geometry and spherical geometry under the University of Leipzig's famous professor, Felix Klein. Klein insisted that Hilbert visit Paris to meet likeminded mathematicians and advance his career. Hilbert obliged and came back to Germany with many great ideas despite some challenges posed by the language barrier.

After his return, he obtained a lecturer position at the University of Königsberg, then eventually became a full-time professor from 1886 to 1895. Klein pushed him once again to dream bigger and petitioned for him to become a professor of mathematics at the University of Göttingen. This mathematics department was a center for many famous mathematicians at the time, such as Bernhard Riemann and John Von Neumann.

Hilbert would spend the rest of his career at Göttingen, supervising 69 doctoral students throughout his time there. He showed great interest in math physics and built a strong physics component within the department. In fact, three winners of the Nobel Prize for Physics—Max von Laue in 1914, James Franck in 1925, and Werner Heisenberg in 1932—spent significant parts of their careers at the University of Göttingen during Hilbert's lifetime. He remained a substantial contributor in mathematics into the 20th century and was the editor of Mathematische Annalen – one of the world's leading mathematical journals – from 1902 to 1939.

In 1900, Hilbert proposed his famous "23 unsolved problems" (considered most challenging problems ever produced by a mathematician) at the Second International Congress of Mathematicians in Paris. While some of these problems were decoded at the conference, others were discussed over the course of the 20th century. Some remain unsolved as they are considered too open ended to have a definite answer. Many mathematicians continue to work on them today.

At age 63, Hilbert contracted pernicious anemia, a vitamin deficiency disease that leaves its hosts enormously fatigued. The disease was untreatable and widely unfamiliar to scientists at the time.

Hilbert was born a Calvinist but became agnostic later in life. During the Nazi's control of Germany, Hilbert witnessed the removal of many of his Jewish colleagues at Göttingen. He vehemently spoke out against this heinous act, telling the Minister of Education his department no longer existed without them. In time, he realized that his fight against the Nazis was tragically fruitless, and he became silent and withdrawn on the matter. Hilbert succumbed to his disease in 1943, leaving behind his wife Käthe Jerosch and their son, Franz Hilbert.

An image of Hilbert and his wife, Käthe Jerosch, in 1892, via Wikipedia

The Legacies of David Hilbert

David Hilbert's legacy lives on today because of his many innovations in multiple fields of mathematics – and he has the namesakes to prove it. They include: the Hilbert Number, Hilbert Matrix, Einstein-Hilbert Equations, Hilbert Axioms, Hilbert System, Hilbert Polynomial, Hilbert Function, and Hilbert Curves, to name a few!

Hilbert created algorithms for space-filling curves that fill up higher dimensional spaces like cubes or squares. This extends the methods of vector algebra and calculus to spaces with any finite or infinite number of dimensions. Hilbert Spaces provided the basis for significant contributions to physics over the following decades.

Hilbert's new axioms of geometry replaced those of Euclid from over 2,000 years earlier with his concept of "betweenness." The axioms unify Euclid's plane geometry and solid geometry into a single system.

This article continues our series exploring the lives and achievements of famous mathematicians throughout history. (Our last article was about John von Neumann, the colorful mathematician who helped design the atomic bomb.)