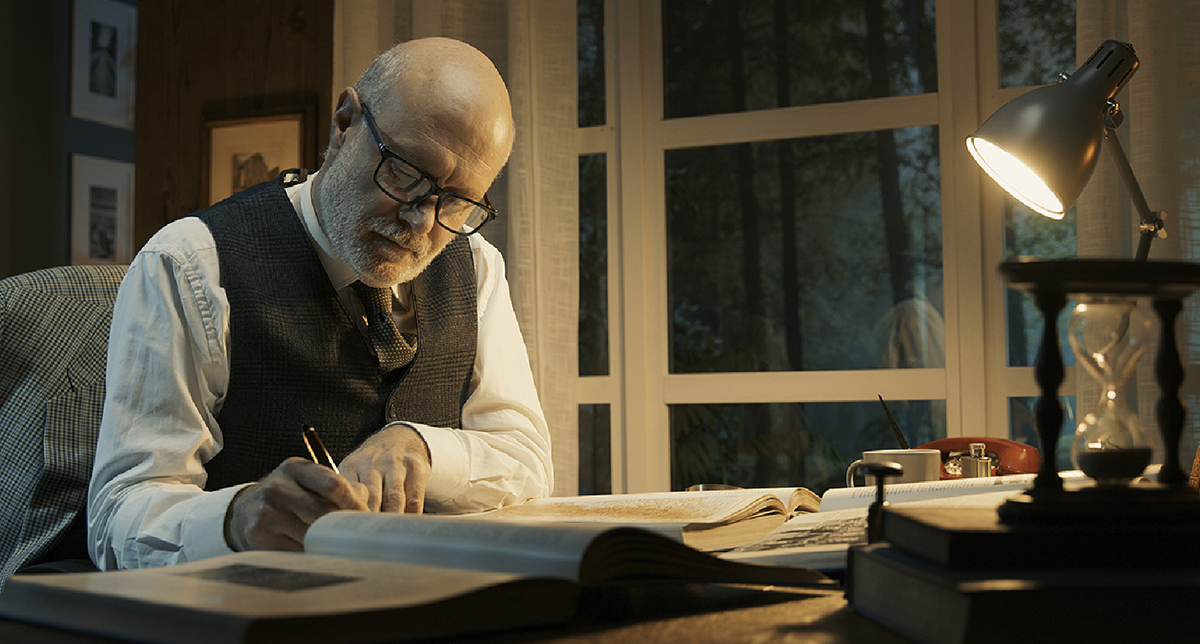 Leonhard Euler was a hardworking man, publishing hundreds of papers and articles throughout his career. The 18th-century Swiss mathematician shaped several disciplines of mathematics and physics, making critical contributions that paved the way for his predecessors.

When he went totally blind in middle age, Leonhard’s productivity only increased. He liked to quip that eyesight had been his last remaining distraction from his work! Learn more about Leonhard’s life as a mathematician and his struggles to navigate the political upheaval of 18th-century Russia.

Leonhard Euler was born in Basel, Switzerland in 1707. His father was a pastor and his mother was a pastor’s daughter, both of the Protestant reformed church. Soon after his birth, the Euler family moved to the town of Riehen, where Leonhard’s father became a pastor at the local church. Leonhard spent most of his childhood in Riehen, spending lots of time with the Bernoulli family, who were friends of his father. As a young child, he took classes from Jacob Bernoulli, who was regarded as one of the most famous European mathematicians at the time.

However, when it came time for Leonhard to begin his formal education, he moved back to Basel to live with his maternal grandmother. When he was 13 years old, he enrolled at the University of Basel. While taking his university classes, he was also receiving private tutoring on the weekends with Johann Bernoulli. Johann discovered Leonhard’s innate talent for mathematics and helped to convince his father to allow him to study mathematics, instead of theology.

At the age of 19, Leonhard completed his dissertation on the mathematical properties of sound. He unsuccessfully tried to get a position at the University of Basel, like many of his friends in the Bernoulli family. However, he was offered a position at the Imperial Russian Academy of Sciences by Daniel Bernoulli, after his brother Nicolaus died, leaving an open professorship. Leonhard quickly learned Russian and adjusted to life in St. Petersburg. He also became a medic in the Russian Navy. When Emperor Peter the Great died, conditions deteriorated at the Academy. He had established the school to modernize Russia and bring it into line with the rapid scientific progress being made in Western Europe. However, Peter the Great’s successors were much more conservative, censoring the professors at the school and displaying general hostility towards the foreigners that held positions there.

Portrait of Leonhard Euler, via latimes.com

In 1731, Leonhard was promoted to Professor of Physics. Just a few years later, he ascended to the head of the mathematics department after his friend Daniel quit and returned to Switzerland. In 1934, Leonhard married Katharina Gsell, the daughter of a well-known Russian painter.

Just a few years later, the Prussian Emperor offered Leonhard a position at his new Berlin Academy. He initially resisted leaving Russia, trying to eke out an academic career amidst political upheaval. By 1741, however, another Russian emperor died, leaving a power vacuum. Leonhard decided to leave and travel to Prussia. Leonhard and his family moved to Berlin, where he would stay for the next 25 years.

In Berlin, Leonhard was given the freedom to publish on whatever topics he wished. During his tenure, he published several hundred papers! However, he was frequently the object of the Prussian Emperor’s scorn. Frederick the Great enjoyed surrounding himself with sophisticated, worldly intellectuals who often leaned towards the secular. Leonhard himself was deeply religious and largely unconcerned with subjects outside of the realm of mathematics and science.

When it came time to appoint the new president of the Berlin Academy, Leonhard was passed over, despite his vast contributions to the academic influence of the academy. Instead, Frederick the Great installed himself as president. Despite the many improved conditions in Prussia, Leonhard missed Russia and stayed in contact with his friends and colleagues there. He even published over 100 papers in Russia, all while employed at the Berlin Academy, a real feat at the time.

In 1766, when Catherine the Great took the Russian throne, the empire stabilized. More in line with Peter the Great’s policies on mathematics and academics, Leonhard felt that he could return to Catherine’s Russia. He accepted another position at the St. Petersburg Academy and returned with his family that same year.

In the meantime, Leonhard’s eyesight was deteriorating. By 1766 he’d already lost most of the sight in his right eye and cataracts were discovered in the left one. A failed surgery in Russia rendered him almost totally blind. Surprisingly, this did not limit his productivity! With the help of assistants who transcribed his work, he published even more than he had before he lost his eyesight.

Leonhard made countless discoveries in the field of mathematics, working with calculus, geometry, number theory, trigonometry, and many areas of physics. He is most notable for creating the function, which assigns every number in set x exactly one number in set y. It is a fundamental building block of algebraic thinking today and you may recognize it as f(x) = y. He also popularized the use of the symbol π!

He expanded on the work his friends in the Bernoulli family had done concerning the new field of infinitesimal calculus. He developed and popularized the power series, which allows for the expression of functions as sums of infinitely many terms. This aided him in advanced calculus analysis, pushing at the previous limitations of the field.

Leonhard was also known for applying his geometry and trigonometry know-how to mechanical engineering and astronomy. He was able to calculate the orbits of planets and other celestial bodies with amazing accuracy, and he laid the groundwork for the wave theory of light with his papers on optics. Finally, Leonhard was interested in the unusual application of mathematics to music composition. He saw music theory as a profoundly mathematical discipline and he believed that a more granular mathematical approach could benefit future composers. However, many saw his music theory work as too mathematical for musicians to make use of.

Euler’s table of the first ten degrees of agreeableness of musical intervals, via thatsmaths.com

In 1783, Leonhard was having a leisurely lunch with his family, discussing the recent discovery of the planet Uranus. Suddenly, he dropped to the ground, dead. He had suffered a massive and unexpected aneurysm. He was eulogized all over Europe by notable mathematicians and scientists.

Leonhard Euler’s role as a lifelong teacher impacted the education of thousands of students in Prussia and Russia, many of whom went on to become important forces of progress in mathematics. His work paved the way for future developments in physics and calculus, most notably.

He’s been featured on several Swiss banknotes, as well as Swiss and Russian postage. An asteroid found by a Russian astronomer in 1973 was named 2002 Euler, and Leonhard’s grave is now the spot of a large commemorative statue.

This article is the fifteenth in our series exploring the lives and achievements of famous mathematicians throughout history. (Our last article was about the Scottish mathematician John Napier!)