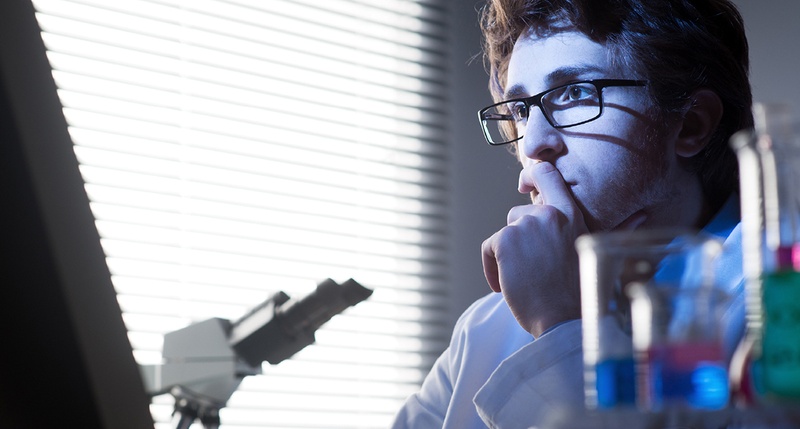 A trailblazer in the world of pharmaceuticals, Dr. Herbert A. Hauptman was the first-ever mathematician to win the Nobel Prize! His research changed the way scientists developed new and effective drugs by analyzing the crystal structure of bacteria and other harmful cells.

The scientific community didn’t always embrace Dr. Hauptman. In fact, many scoffed at his attempt to infiltrate their world. However, his kind and gentle demeanor eventually won over the hearts of scientists and mathematicians alike. Read on to learn more about why we have Dr. Hauptman to thank for modern medicine!

Dr. Herbert A. Hauptman receiving an honorary degree from the University of Buffalo in 2009, via Wikipedia

Dr. Herbert A. Hauptman was born in the Bronx, New York, in 1917 and was interested in math and science at a young age.

Excelling at both subjects in public school, Dr. Hauptman endeavored to win entry to the prestigious Townsend Harris High School, which condensed four years of high school into three. After graduating from Townsend Harris with ease, Dr. Hauptman gained automatic admission to City College of New York – the first free public institution of higher education in the United States. Here, he continued to build his impressive resume and won the Belden Prize in Mathematics in 1936. He graduated the following year with his bachelor’s of science in mathematics.

Though the Great Depression had technically ended a few years prior, the U.S. economy subsequently suffered a vast economic recession. At the time, one of the only jobs available for mathematicians was to teach.

Unfortunately, that option wasn’t available to Dr. Hauptman either. The state of New York required educators to pass speech exams to become teachers – and Dr. Hauptman’s thick Bronx accent did not make the cut. As it would turn out, this rejection was the perfect redirection and set Dr. Hauptman on the path that would amaze the scientific community and the world!

After earning his master’s degree in mathematics from Columbia University in 1939, Dr. Hauptman joined the Navy to serve in World War II. This enlistment came right after meeting his wife, an educator named Edith Citrynell, in the fall of 1940. (Fun fact – he met her on a double-blind date, and she was paired up with his friend!)

In the Navy, Dr. Hauptman served as a weather forecaster in the Southwest Pacific and was responsible for responding to various crises. Though he only had one day of fire training, he also acted as a fire marshall in the Philippines. His time in the war was chaotic and grim and inundated with many near-death experiences. He sought solace in his math books during the rare moments he had to himself, keeping his calculus skills sharp for his eventual return home.

Because of the violent and horrific experiences he faced as a Navy officer, he actively protested against American involvement in foreign conflict, including the Vietnam War.

Passionate about continuing education, Dr. Hauptman enrolled in a Ph.D. program at the University of Maryland upon returning stateside. He simultaneously began working at the Naval Research Lab in Washington D.C., where he’d eventually meet his partner in science, Dr. Jerome Karle. Dr. Karle was a chemist who graduated from City College the same year as Dr. Hauptman, though the two men did not know each other prior.

Herbert A. Hauptman Develops the Shake and Bake Method

In their 1953 monograph “Solution of the Phase Problem I - The Centrosymmetric Crystal,” Dr. Hauptman utilized his math talents to develop a technique that gave pharmaceutical researchers the ability to determine the crystal structure of germs. He called it the “shake and bake” method, and it allowed scientists to create bacteria-fighting drugs. At first, scientists refused to believe it was true. His monograph was severely criticized because he was considered an outsider, and many chemists thought the problem was not solvable.

The naysayers came around eventually – and used his findings for new, exciting ventures like developing more formidable painkilling drugs by studying the structure of the body’s natural pain control substance called enkephalins.

Because of his discoveries, chemists could analyze molecular structures quicker than ever before. Before Dr. Hauptman, it could take two years to work out the structure of a simple antibiotic molecule made up of 15 atoms. With his methods, it took mere days.

Herbert A. Hauptman: The Man Who Gave His Gifts

In 1970, Dr. Hauptman joined a crystallographic group at a small, nonprofit biomedical research institution called the Medical Foundation of Buffalo (MFB). He became the center’s research director and then its president two years later. In 1994, MFB was renamed to the Dr. Hauptman-Woodward Medical Research Institute to honor him and the philanthropist Helen Woodward-Rivas who provided seed funding for the nonprofit.

Additionally, Dr. Hauptman worked as a biophysical and computer science professor at the University of Buffalo. As a U.S. National Academy of Sciences member, he received many honorary degrees from universities worldwide, including Poland, Israel, and Italy. Of course, perhaps the most distinguished award of them all was the Nobel Prize.

Overall, Dr. Hauptman was a beloved and respected professor, mathematician, and friend to many. It’s been noted that he had many lovable quirks, including the general disdain for brushing his hair (his wife had to do it for him). He also kept his watch twelve minutes too slow, but managed to never be late. Dr. Hauptman passed at the age of 94 in 2011.

Herbert A. Hauptman: The First Mathematician to Win the Nobel Prize (1985)

Dr. Hauptman’s Nobel Prize photo for his work on Crystal Structures, via NobelPrize.org

Despite his spectacular discoveries, Dr. Hauptman was not inducted into the National Academy of Sciences when his partner Dr. Karle was because he was not a chemist. However, that quickly changed when his name was called up for a Nobel Prize! Since there wasn’t a category for mathematics, he won in the chemistry division. That was good enough for the academy! As soon as he was announced as a Nobel laureate, they reached out with an invitation.

This article is the twentieth in our series exploring the lives and achievements of famous mathematicians throughout history. (Our last article was about the mathematician known as the “French Newton,” Pierre-Simon Laplace!)