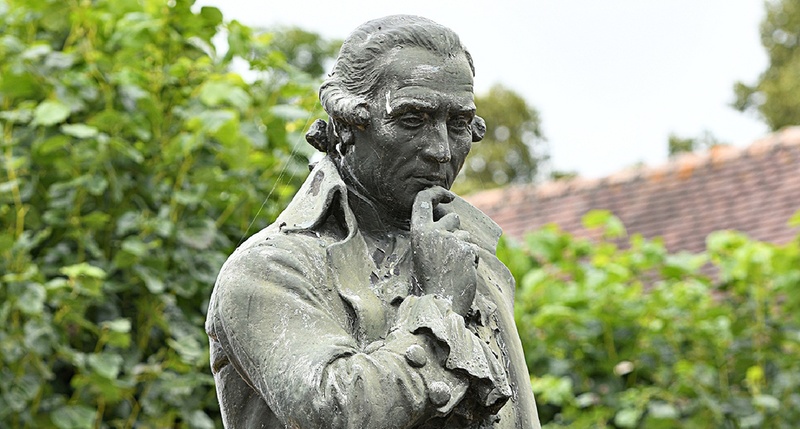 A son of agriculturalists, Pierre-Simon Laplace (1749-1827) was a trailblazer in the mathematics community from a very young age. Though his father hoped he'd become a priest, Laplace chose a different path. His early work fast-tracked him to becoming one of the most prolific mathematicians in the era of the French Revolution.

Laplace hit celebrity status in the early 1800s when he reported his findings that provided accurate calculations of the motion of the planets and their satellites. His work negated Isaac Newton's theory that divine intervention was required to stabilize the solar system. Read on to learn more about his noteworthy findings!

Pierre-Simon Laplace: The Priest that Never Was

Portrait of mathematician Pierre-Simon Laplace, by James Posselwhite, via Wikimedia

Pierre-Simon Laplace was born in 1749 in Normandy, France, to propertied parents who lived quite comfortably. Pierre Laplace Senior was also a cider merchant in their town of Beaumont. While Laplace Senior desired his son to become a priest, the budding mathematician had other plans in mind.

While studying at the University of Caen, Laplace met two math professors who would soon become his mentors: Christophe Gadbled and Pierre Le Canu. These two men immediately saw his potential and sent Laplace's first paper to the renowned Italian mathematician Joseph-Louis Lagrange. Lagrange would later publish the article in Miscellanea Taurinensia, solidifying Laplace's passion and drive to pursue mathematics.

Laplace's mentors didn't stop there. After his impressive placement in Miscellanea Taurinensia, Pierre Le Canu wrote a letter of recommendation to Jean-Baptiste le Rond d'Alembert, a leading mathematician in Paris with ties to prestigious universities. Laplace swiftly took it upon himself to meet him in person – a gesture d'Alembert did not appreciate. To get Laplace out of his hair, he gave him a thick book of theories and equations to read through, hoping it would scare him away for good. It didn't – Laplace returned just a few days later, indicating his complete understanding of the book!

With d'Alembert's help, Laplace took on his first teaching position at Ecole Militaire, a military academy in Paris. However, he had bigger dreams and applied for a job at the Academy of Science in Paris. Much to his chagrin, he was passed over for older (but less prolific) mathematicians – but that didn't last long. In 1773, he became an adjunct member of the Academy and was promoted to a senior position in 1785.

As his reputation grew, he began to tackle problems formerly considered too complex for the mathematics community, including applying differential calculus to the motion of astronomical objects. Perhaps his most notable contribution was the framework he developed to calculate the movement of planets and their satellites – something English mathematician Isaac Newton concluded was a result of "periodic divine intervention." This discovery was an early indication of Laplace's atheism, something he later confirmed to Napolean Bonaparte. Laplace also dedicated much of his studies to the theory of probability and wrote one of the most influential mathematics books on the subject. Because of his many contributions, some regard Laplace as the "French Newton" or "Newton of France."

Besides his career in mathematics, Laplace had a brief stint as the minister of the interior for Napolean Bonaparte. His appointment lasted just six weeks, as Bonaparte noted in his memoir that Laplace was a frustrating character who "sought subtleties everywhere, conceived only problems, and finally carried the spirit of 'infinitesimals' into the administration."

Mathematics dominated the majority of Laplace's life, as he continued to write papers well into his 70's. He died in Paris in 1827, and his tomb remains situated in Normandy, France.

A timeline of the Life and Work of Pierre-Simon Laplace

In his 1687 publication Philosophiae Naturalis Principia Mathematica, Isaac Newton postulated that while his fundamental laws of mechanics and universal gravitation can partially explain the motion of the planets in the solar system, a complex set of equations that "could not be solved" remained. He deduced that "periodic divine intervention" was necessary to keep the solar system stable.

The science community widely accepted Newtown's conclusion for almost a century – that is, until Laplace made an earth-shattering discovery! In his work titled Celestial Mechanics, published in five volumes between 1799 and 1825, Laplace described the framework he developed to calculate the motions of planets and their satellites, effectively showing stability in the solar system without divine intervention. These books made him a celebrity and gained the attention of French military leader Napolean Bonaparte.

When Bonaparte asked why God wasn't mentioned in his findings, Laplace famously replied, "I had no need of that hypothesis."

Though the theory of probability originated in the 1600s, Laplace's contribution to the subject (a book titled Théorie analytique des probabilités) is noted as one of the most influential publications in mathematics. In the book, Laplace laid the foundation for the subject and formulated its basic principles. He even gave practical examples, applying probability to mortality, the length of marriages, and life expectancies. On probability, Laplace famously wrote:

"The theory of probabilities is at bottom nothing but common sense reduced to calculus; it enables us to appreciate with exactness that which accurate minds feel with a sort of instinct for which times they are unable to account."

In his 1814 publication "Philosophical Essay on Probabilities," Laplace once again referenced Newton's work and made a statement on scientific determinism.

Determinism is the doctrine that states all events, including human action, are determined by previously existing causes. This philosophical view is in direct contrast to the concept of free will. Newton further pushed this idea in the math community with his equation of motion – showing a precise mathematical relationship between cause and effect.

"We may regard the present state of the universe as the effect of its past and the cause of its future. An intellect which at a certain moment would know all forces that set nature in motion, and all positions of all items of which nature is composed, if this intellect were also vast enough to submit these data to analysis, it would embrace in a single formula the movements of the greatest bodies of the universe and those of the tiniest atom; for such an intellect nothing would be uncertain, and the future just like the past would be present before its eyes."

Though Laplace did not use the word "demon" himself (it was later added as an embellishment), his ideas on determinism would dominate the field of science for years to come.

This article is the twentieth in our series exploring the lives and achievements of famous mathematicians throughout history. (Our last article was about the Egyptian mathematician Claudius Ptolemy!)