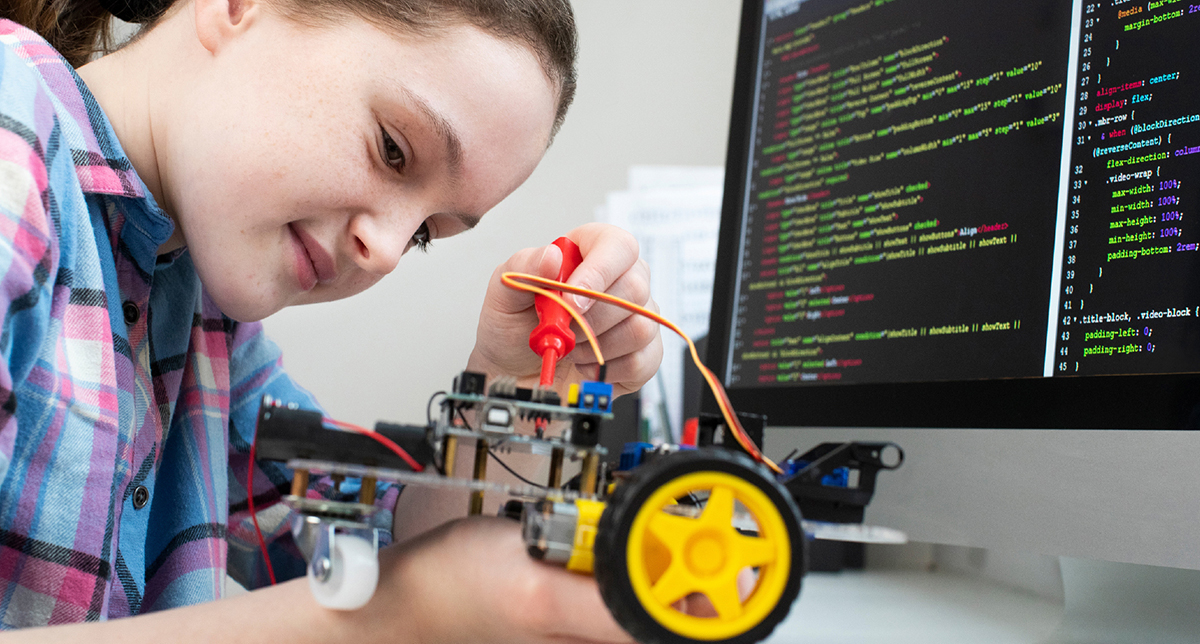 Did you know that a British woman mathematician from the 19th century is widely recognized as the first computer programmer?

Ada Lovelace is a beloved pop culture icon and a feminist trailblazer. Her work on mechanical computing devices shaped the beginnings of the invention of the modern computer.

Fundamentally, Ada believed that intuition and creativity were essential qualities to the practice of mathematics. She pushed boundaries, imagined new applications for established ideas, and integrated math and poetry in many of her writings. It’s what led her to understand the possibilities of mechanical computing long before anyone else.

Portrait of Ada Lovelace, via Wikimedia

Ada Lovelace was born in 1815, in London, England. Her parents were Lord Byron, a famous English poet, and mathematician Lady Byron. She was the only child born to the Byrons, as the rest of Lord Byron’s children were out of wedlock, with other women.

However, Lord Byron was disappointed that Ada was a girl, bemoaning his dashed dream of a male heir. After Ada was born, Lord Byron split from his wife and had no hand in raising his daughter. Lady Byron was not very interested in raising Ada either, so she left her infant daughter with her maternal grandparents.

Ada never knew her mother very well, but the two kept up a cordial relationship for public appearances. Lady Byron had to keep up the illusion that she was a doting, loving mother for court, so she wrote up a slew of fake letters anxiously inquiring about Ada’s health and well-being. The letters were procured anytime there were questions about who was taking care of Ada.

Ada grew up as a frequently sick child. She was often bedridden with debilitating migraines and bouts of illness. In 1829, Ada contracted measles, which left her paralyzed for over a year. Despite her mobility issues and poor health, she was a curious child who was interested in math from a young age. At 17, Ada began receiving private tutoring from some of the country’s best teachers, including Mary Somerville. Somerville would later become a close friend.

Ada was interested in calculus, biology, and psychology, necessitating education which her family was able to facilitate with their wealth and social position. Her mother had always been afraid of illogical and passionate bouts of fancy, which she saw as the kind of madness that Ada would inherit from her father. To ward off madness, Ada’s mother encouraged her interest in logical subjects like math and science. In 1833, Ada became romantically involved with one of her tutors. The two attempted to elope when their relationship was discovered, but her mother found out and stopped her.

By 1834, Ada was regularly appearing at court and attending high-profile social events. She became acquainted with many well-known British thinkers, including the author Charles Dickens, who was a lifelong friend. At court, Ada met William, the 8th Baron King, who she later married. William came from a line of nobles, as did Ada, so the two had many residences and lived in a state of luxury for the entirety of their married lives together.

In the 1840s, Ada’s reputation became marked by scandal, including extra-marital affairs and a love of gambling. She felt that gambling was an exciting game of mathematical skill and became convinced of a precise mathematical method to win big on very large bets. However, her method was never successful and she ended up in debt to the tune of tens of thousands of pounds.

Tragically, Ada died of uterine cancer at the very young age of 32. Her illness lasted several months, in which she allowed her mother to take over her affairs and become the executor of her estate. Ada’s mother oversaw a strange religious transformation in her bedridden daughter, causing Ada to repent for the gambling and affairs she had been known for. A few months before her death, Ada confessed something to her husband that caused him to split from her and abandon her on her deathbed. Ada was buried next to her father.

Ada Lovelace dabbled in many areas of science and math, including some science fads that were later proven to be false. One such passion Ada had was with phrenology, the study of the correlations between skull shape and personality. She also enjoyed the study of mesmerism, a school of thought that held that all living things possessed an invisible magnetic force that had physical effects like healing. However, beyond some of her stranger fascinations. Ada was also very interested in calculus, the study of the human brain, and the properties of electricity.

Ada is perhaps best known for her work with Charles Babbage on his Analytical Engine, one of the predecessors of the modern computer. Ada met Babbage through her tutor and friend, Mary Somerville. Babbage showed her his prototype for the difference machine, a mechanical computing device, which sparked her interest in the subject of computing machines.

A modern example of the Babbage Analytical Engine, via Brittanica

In 1942, Ada translated Italian mathematician Luigi Menabrea’s French transcription of a lecture that Babbage had given on his new Analytical Machine device. She added a series of her notes and additions to the translated paper which clocked in at three times the length of Babbage’s original lecture. In her notes, Ada included ideas on how to calculate certain complex mathematical proofs by programming the machine once it was built, forming the first computer program. Although the Analytical Machine was never actually built, researchers today believe that her program would have likely worked.

Beyond the first computer program, Ada was also one of the first thinkers to speculate on the non-mathematical applications of computing devices. In some of her writings, she described how other natural phenomena such as music could be made to correspond to mathematical operations and described through computation. She believed that operations could correspond to any number of other kinds of languages and express ideas in many different forms, going above and beyond the imaginations of many of her contemporaries on the possibilities of mechanical computation machines.

Ada’s notes on her Computer Program, via ProjectLovelace

Today, Ada Lovelace is remembered as a visionary pioneer in the world of mathematical history. In 1980, the US Department of Defense named their proprietary computer programming language Ada, in recognition of her impact on the field. Since 2009, Ada Lovelace Day has been celebrated on the second Tuesday of October internationally!

Beginning in 2015, all British passports feature a portrait of Ada Lovelace and Charles Babbage on a two-page spread. Finally, five of the six original copies of Ada Lovelace’s notes on the translation of Babbage’s speech are in prestigious institutions of higher education. The sixth sold at auction in 2018 for nearly 100,000 pounds.

This article is the sixth in our series exploring the lives and achievements of famous mathematicians throughout history. (Our last article was about the British mathematician G.H. Hardy!)