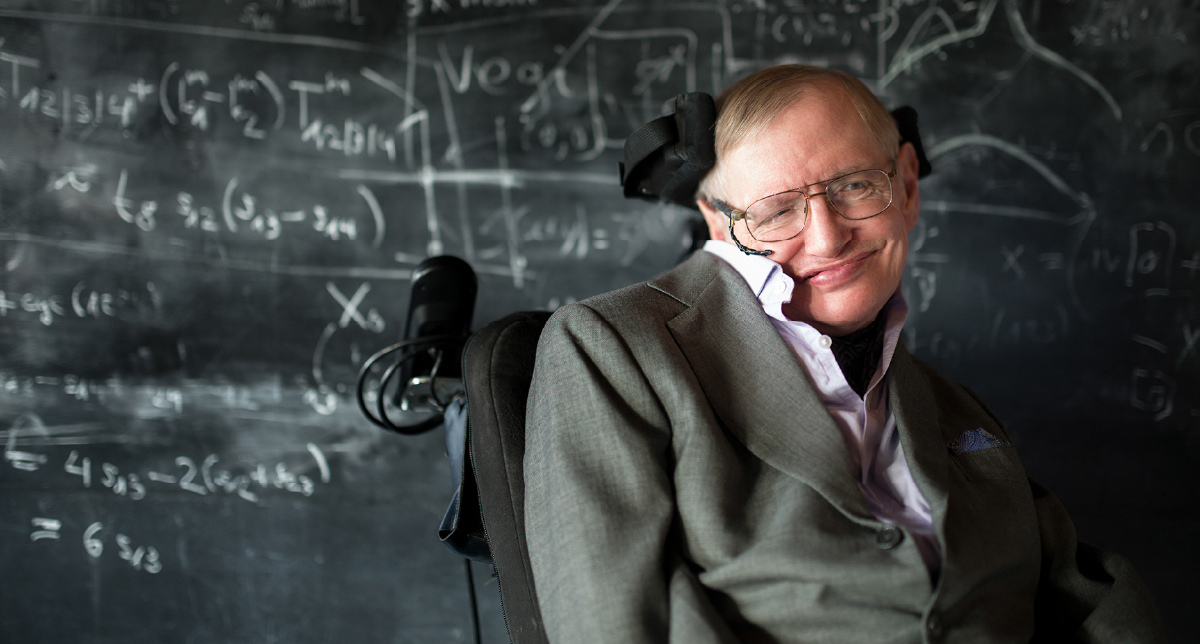 Stephen Hawking is considered one of the greatest theoretical physicists of our time. His work changed our understanding of the universe and black holes.

Hawking published best-selling books that made difficult theoretical concepts easy to understand. He earned thirteen honorary degrees and many awards, including the U.S. Presidential Medal of Freedom. He was also made a Commander of the Order of the British Empire.

He accomplished this while living with ALS (Amyotrophic Lateral Sclerosis). ALS is an incurable, progressive disease. It affects motor control and muscle movement but leaves the brain intact. In its later stages, ALS causes patients to lose the ability to walk, talk, eat and breathe on their own.

Discover how Hawking accomplished so much in spite of a debilitating, incurable illness.

Hawking as a Young “Einstein”

Hawking was born January 8th, 1942. According to his biography, he was born exactly 300 years after the death of the famous Italian astronomer Galileo Galilei.

Hawking was one of four children born to Dr. Frank and Eileen Hawking in Oxford, England during World War II.

His father was a well-known medical researcher. He hoped Hawking would pursue studies and a career in medicine. However, Hawking preferred mathematics and physics to biology.

Although he wasn’t at the top of his class growing up, he was keenly interested in learning how the world worked. His peers gave him the nickname “Einstein” due to his brilliant mind and insatiable curiosity about the universe.

Hawking enrolled in Oxford University in 1959 and graduated in 1962 with a first-class honors degree in physics. He then entered Cambridge for postgraduate studies, where life would take a dramatic turn.

Hawking began to notice the first signs of physical illness while he was in college. He reportedly felt clumsy at times and struggled with everyday tasks like tying his shoes.

When his physical symptoms persisted, Hawking’s mother took him for tests in a London hospital. He was diagnosed with ALS at the age of 21 and given two years to live.

Understandably, Hawking was initially depressed by his diagnosis. But he was fortunate to have an inspirational force in his life: his love for Jane Wilde (his future wife). Wilde and Hawking vowed to fight ALS together.

Hawking received his Ph.D. in physics from Cambridge in 1966. He then began a research fellowship at Cambridge (and remained there as a fellow for the rest of his life.)

That same year, Hawking won an auxiliary to the Adams Prize. The Adams Prize is one of the most prestigious awards given by the University of Cambridge. His prize-winning essay was entitled “Singularities and the Geometry of Space-Time.” It was Hawking’s first major contribution to his field. It formed the foundation for his first academic book, co-authored with fellow physicist George Ellis.

In the following years, Hawking continued to focus on understanding the laws of the universe. He wrote that based on Einstein's theory of relativity, space and time would begin with the Big Bang and end with black holes.

Hawking and mathematical physicist Roger Penrose worked together to prove this theory, and Hawking’s passion for studying black holes was ignited.

The concept of a black hole begins with Albert Einstein’s theory of relativity. Hawking forever changed the way we understand black holes.

It was thought that a black hole was “black,” meaning nothing could escape its gravitational pull. In 1973, Hawking’s research into relativity and quantum theory led him to a stunning realization. Particles (measured as heat) could escape a black hole. His theory was initially disputed by his peers, but eventually became accepted and known as Hawking radiation.

Hawking made another important discovery about black holes around this time. Black holes were not always huge, as physicists believed. Hawking theorized there were millions of tiny black holes made from the explosion in the original big bang.

These discoveries led to new questions that physicists still debate today. Questions like, what happens to matter that is pulled into a black hole?

They also sparked a new public interest in black holes and the mechanics of the universe.

Although ALS did not end Hawking’s life nearly as quickly as doctors expected, it did continue to progress through the years. At the end of the 1960s, he relied on a wheelchair to move. In the 1970s, he began having trouble with speech. He didn’t allow these challenges to stop his research, however. In fact, he traveled often to speak and meet with fellow scientists.

In 1985, Hawking developed pneumonia while on a trip to Geneva. A tracheostomy was necessary to save his life, but it caused him to lose the ability to speak.

For a period of time, Hawking could only communicate with the world by moving his eyebrows to spell out letters. Thankfully, technology evolved to solve this problem. Hawking worked with software engineers from Intel to develop a computerized voice synthesizer he could operate with his cheek.

With his ability to communicate reinstated, Hawking began his next project…one that would make him famous around the world.

A Brief History of Time

Hawking had a desire to write a book that would appeal to a broader non-scientific community. He wanted to share his passion for the universe with the rest of the world, in a way the public could understand.

Hawking began writing down ideas for his book, entitled A Brief History of Time, in 1982. It was published six years later and became an immediate bestseller. It stayed on the United Kingdom’s bestseller list for over four years and was translated into 40 languages. Over 20 million copies were sold worldwide.

Hawking succeeded in helping people understand how the universe works, something he felt was important in a world that was rapidly advancing in the fields of science and technology.

Hawking continued to work, research, and publish books about the universe for the next several decades.

In 2007, he famously took an anti-gravity flight to promote space travel and raise money for ALS awareness.

The same year Hawking founded the Centre for Theoretical Cosmetology. Its purpose was to “advance the scientific understanding of our Universe, taking forward the vision of its founder.”

In 2009, then-President Barack Obama presented Hawking with the Presidential Medal of Freedom. It is the highest award a civilian can receive in the United States.

Stephen Hawking Receives the Presidential Medal of Freedom, via Wikimedia.org

A movie about Hawking’s life, The Theory of Everything, was released in 2014 to great acclaim.

Hawking died peacefully at home on March 14, 2018 (Albert Einstein’s birthday). He lived over 50 years with ALS. In all that time, he never stopped working. His passion for science and understanding the universe could not be contained.

His legacy lives on in his writings, the Centre for Theoretical Cosmetology, and the countless people he inspired to follow in his footsteps.