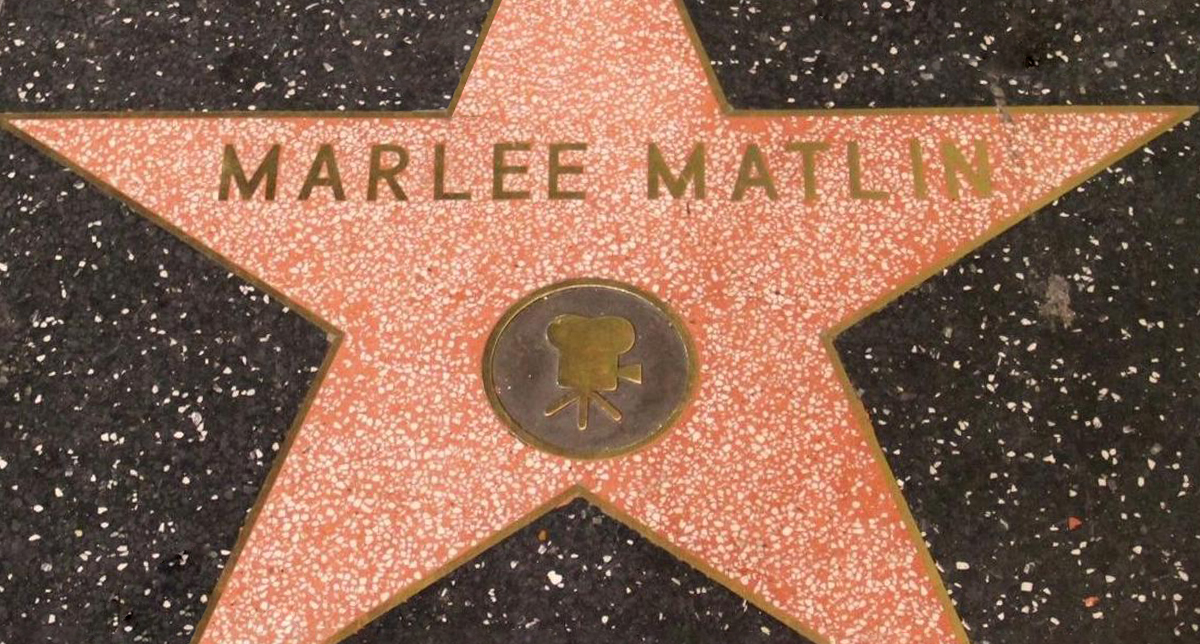 Marlee Matlin is an American actress and activist. She works on behalf of people with hearing impairment and other disabilities.

Matlin was born with the ability to hear. High fevers caused Matlin to lose her hearing when she was 18 months old.

Her disability didn’t stop her from pursuing her dream of being a performer. At the age of 21, Matlin was the first deaf performer to win an Academy Award and the youngest winner of an Oscar for Best Actress. She was also one of only four actresses to win a leading lady Oscar for a film debut.

Matlin also fights for better representation of hearing-impaired people in movies and TV. She has worked on behalf of many charities and nonprofit foundations.

Read on to learn about Matlin’s unstoppable energy, talent, and passion for helping others!

Matlin suffered an illness and high fevers when she was 18 months old. The fevers caused her to permanently lose her hearing.

Her parents desperately sought help for their baby girl. They were told by doctors that Matlin should be sent away from home to attend a school for deaf children. The thought of being separated from Matlin was unacceptable to her parents. They chose instead to keep her at home and found local programs that supported children with hearing loss.

Matlin’s parents gave her the freedom to explore the world just like the other children in her neighborhood. Supported by two brothers who looked out for her, Matlin fearlessly met new people. She and her family used humor to help others feel comfortable about her differences.

Matlin credits her parents with encouraging her to participate in activities with both hearing and deaf children. She attended a summer camp one year and was asked to sign along to a song the group was singing. Matlin saw such a positive reaction from the audience to her use of sign language that she was inspired to continue performing.

Matlin as a Young Performing Artist

After that fateful summer camp, Matlin’s mother enrolled her at the International Center for Deafness and the Arts Through Education. ICODA is a performing arts center for deaf and hearing children to practice their crafts together.

At the age of seven, Matlin was cast in her first leading role as Dorothy in the Center’s production of “The Wizard of Oz.” A star was officially born.

Matlin continued to tour with the Children’s Theatre of the Deaf through her school years.

She enrolled in a community college with the intention of becoming a police officer. Sadly, she discovered there were few opportunities for deaf people in law enforcement. So, she turned her focus back to performing.

In 1985, Matlin was cast in Chicago’s Immediate Theater’s production of “Children of a Lesser God.” The original play had won a Tony award five years earlier.

Although Matlin had a supporting role in the play, her stellar performance was noticed by film director Randa Haines. As Haines stated in an interview with the Chicago Tribune, “Something about [Matlin] touched me deeply.”

Haines cast Matlin as the lead in the movie adaptation of “Children of a Lesser God” alongside renowned actor William Hurt. Matlin officially earned her “big break.”

Oscar Firsts for Matlin & “Children of a Lesser God”

When “Children of a Lesser God” was released in 1986, it received immediate acclaim from both critics and audiences. The movie grossed over $100 million worldwide. Matlin, Hurt, and Haines all received rave reviews.

Matlin won the Academy Award for Best Actress, making her (at the age of 21) the youngest actress to do so. She was also the first deaf person to win an Oscar.

Marlee Matlin in 1989, via Wikimedia.org

Matlin continues to act to this day. She earned an Emmy nomination for her guest role as Jerry Seinfeld’s deaf girlfriend on the show “Seinfeld.” Matlin was also nominated twice for a Golden Globe Award for her role in the TV series “Reasonable Doubts.”

Her most recent movie role was in 2021, in the Oscar-winning “CODA.” CODA stands for “Children of Deaf Adults.” The movie featured several deaf actors, highlighting a cause Matlin has long fought for: greater representation of the deaf and disabled community in the entertainment industry.

Matlin discussing people with disabilities in the media, via Wikimedia.org

Matlin’s activism extends beyond inclusion in Hollywood. She was also instrumental in requiring streaming companies like Netflix to offer closed captioning.

She has been involved with over a dozen charities and nonprofit foundations, including the American Red Cross, American Civil Liberties Union, American Humane Association, and Starlight Children’s Foundation.

Since winning her groundbreaking Oscar, Matlin has consistently used her celebrity and influence to give back by advocating for inclusion, equality, and accessibility for people with disabilities. Her tireless campaigning has changed the lives of many, for the better.