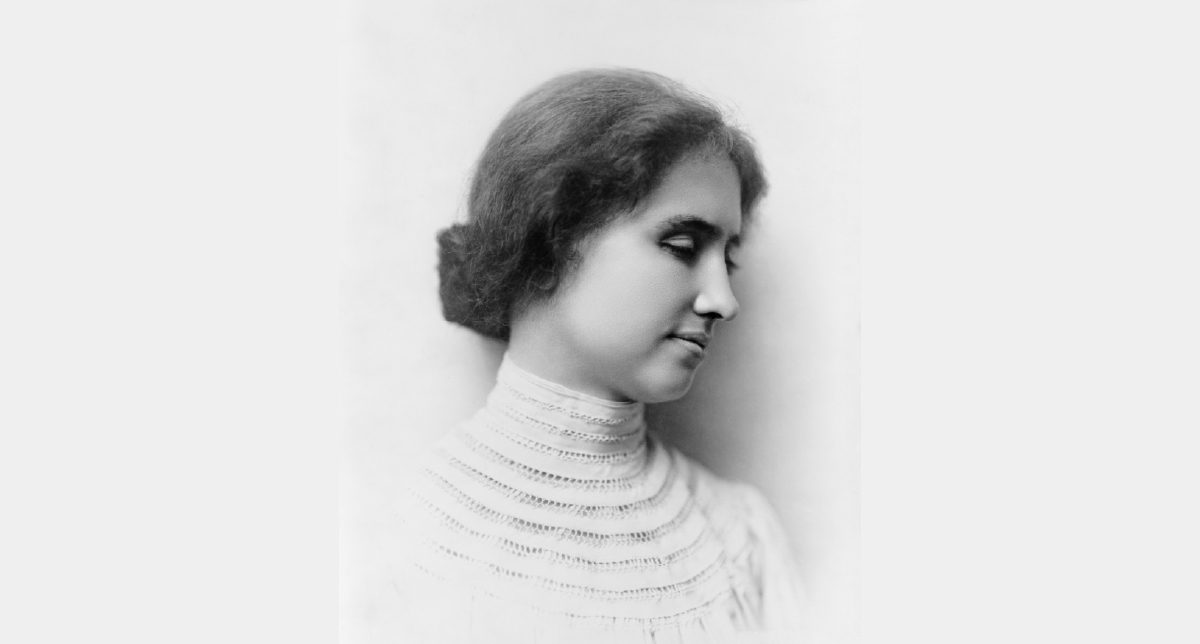 Helen Adams Keller was born June 27, 1880 in Tuscumbia, a small town in northwestern Alabama on the Tennessee River.

When she was 18 months old, Keller developed a very high fever that lasted for several days that left her deaf and blind. Over the next few years, her behavior regressed. She became willful and unruly, often screaming and kicking to express frustration and anger. She developed her own set of signals to communicate with her parents but had no way to interact with the outside world.

Keller’s mother contacted Dr. Alexander Graham Bell when Keller was six years old. She had heard he was developing devices to help with deafness. Dr. Bell recommended sending a teacher from the Perkins Institute for the Blind, located in Boston, to help Helen. Dr. Bell’s son-in-law was a director at the Institute.

Read on to discover how Keller overcame the challenges of early childhood blindness and deafness. She became an accomplished writer, educator, and activist!

Keller was born a healthy baby. She began walking and talking around her first birthday. However, her development was cut short just six months later when she became ill with what may have been scarlet fever.

After spending several days with a very high temperature, Keller was left permanently blind and deaf.

The next few years of Keller’s life were a struggle for her and her parents. Keller needed help connecting and communicating with the outside world, and her mother and father were not equipped with the necessary skills.

Thankfully, Sullivan’s arrival when Keller was six years old would change things for the better in the Keller household.

Sullivan had experienced her own challenges growing up. Her mother died when she was eight and her father abandoned her and her two siblings a few years later. Sullivan also experienced an illness that left her partially blind.

When she was 14, Sullivan entered the Perkins Institute for the Blind as a student. She graduated six years later at the top of her class and was placed with the Keller family in 1887 as Keller’s private teacher.

Little did she know, her relationship with Keller would change both of their lives.

Portrait of Helen Keller with Anne Sullivan, via Wikimedia

When Sullivan arrived at the Kellers’ home, she met a somewhat wild and unruly 6-year-old Keller. For four and a half years, Keller’s only way to experience the world had been through her sense of touch.

With no way to learn to speak, Keller’s ability to communicate was reduced to yelling or making signals when she wanted something. Kicking and screaming were commonplace.

During the first few weeks with Sullivan, Keller threw many tantrums and hit, kicked and pinched her teacher. She even knocked out one of Sullivan’s teeth during an outburst.

Sullivan remained patient and consistent with Keller. She used a technique called “fingerspelling” to describe the names of everyday objects into Keller’s hand.

At first, Keller didn’t understand the meaning behind the fingerspelling. Then one day, everything clicked. Sullivan pumped water over Keller’s hand while spelling the word “water.”

Keller suddenly made the connection. Years later she wrote about her experience, “That living word awakened my soul, gave it light, hope, joy, set it free! …Everything had a name, and each name gave birth to a new thought.”

From that point on, Keller and Sullivan were inseparable as student and teacher. Keller enthusiastically learned everything she could about the world around her.

Over the next few years, Keller learned sign language and the Braille system, and her ability to read and write was born.

Sullivan took Keller to visit the Perkins Institute in 1888, and a new world opened up for her. She met other children like her who could communicate through fingerspelling.

At Perkins Keller learned French, math, and geography and spent a lot of time in the library soaking up as much as she could.

Keller also attended the Horace Mann School for the Deaf in Boston. There she began a decades-long mission to learn to speak in a voice that others could understand.

At age 14, Keller began studying at the Wright-Humason School for the Deaf in New York City. Two years later she moved to Massachusetts to attend the Cambridge School for Young Ladies.

She graduated with honors from Radcliffe College in 1904. Sullivan was at her side the whole time, interpreting lectures and reading to her.

Keller’s Activism for People With Disabilities

After college, Keller became an active proponent for people living with disabilities. She traveled the world and lectured for the American Foundation for the Blind. She visited hospitals and offered comfort and support for blind soldiers.

Her goal was to encourage and remind people with blindness that life was rich, beautiful and purposeful.

She authored several articles about living with blindness. Her work was published in popular magazines including Ladies’ Home Journal, McClure’s and The Atlantic Monthly.

Keller wrote several books about her life experiences. She also wrote to Congress to improve the lives of people with deafness and blindness.

Keller spent the rest of her life fighting for rights and better conditions for people living with disabilities. She co-founded the American Civil Liberties Union with fellow civil rights activist Roger Nash Baldwin in 1920. She also established a $2 million endowment for the American Foundation for the Blind.

By 1937, Keller was successful in getting commissions for the blind organized in 30 states.

Keller died in 1968 at her home in Easton, Connecticut. By that time, the story of her life with Sullivan had been made into a Pulitzer Prize-winning play called The Miracle Worker. The play was then made into a movie that won two Academy Awards.

Keller's determination proved that people with disabilities can (and do) achieve incredible things. Her spirit changed how the world saw people like her.