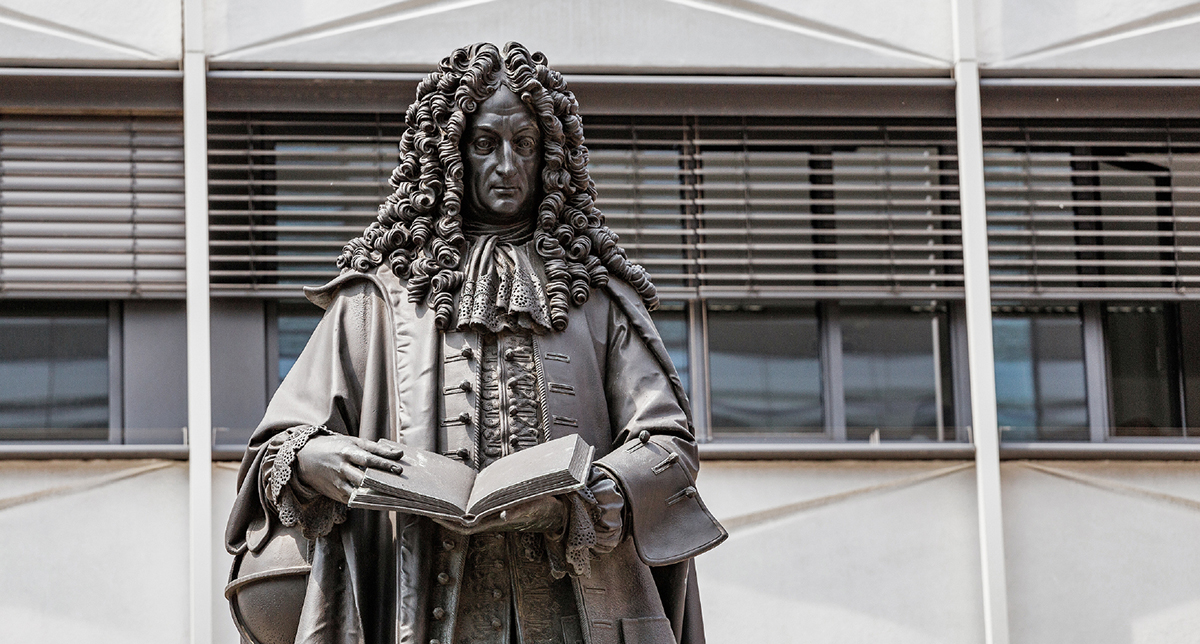 Gottfried is also known for his philosophical optimism and his rigorous development of analytic philosophy. During his life, his work was marred by accusations of plagiarism made by contemporary, Isaac Newton. Newton claimed that Gottfried had stolen his theory of calculus, which tanked Gottfried’s career. Posthumously, mathematicians have attempted to acquit him from the accusations, noting that his approach to calculus was much different.

Today Gottfried is remembered as a critical figure in the development of logic, calculus, computer science, and library science. Read about Gottfried’s unusual life and how he moved from career to career, motivated by his singular expectations for the world.

Gottfried was born in 1646 in Leipzig, Saxony. His father was a Professor of Moral Philosophy at the local university, so Gottfried was brought up with an enormous amount of books. This was very unusual at the time, and when Gottfried's father died when he was just 6 years old, he was soon given free rein of his father’s library. Books were still rare and expensive, and literacy was low, so Gottfried’s young childhood provided him with extraordinary opportunities. The young Gottfried taught himself Latin, as most books were written in scholastic Latin at the time. He filled his days with theological and philosophy books.

At the age of 14, Gottfried enrolled at the University of Leipzig, the same school his father had worked at. He completed his Bachelor's Degree in Philosophy the next year. At 17, Gottfried earned his Master’s in Philosophy, simultaneous to his Bachelor’s in Law. At 19, Gottfried defended two theses, earning his Doctorate in both Law and Philosophy. This extraordinarily condensed period of schooling would set the stage for Gottfried’s multidisciplinary career, as he would dabble in dozens of different subjects for the rest of his life.

Immediately after earning his advanced degrees, Gottfried schmoozed his way into a position at a Nuremberg alchemical society. Though he knew little about the field, he pretended he was an expert. In this position, he was able to meet many notable nobles and academics. He was subsequently hired by a politician, who allowed him to take a large part in the redrafting efforts for the Saxon Electoral Codes.

This experience launched him into German-speaking geopolitics, where Gottfried tried to pull strings behind the scenes with a plan to distract the French Empire from further conflict with German-speaking kingdoms. Though the German kingdoms were behind his plan to offer Egypt to France under the condition that they would be left alone, the French Empire was not so easily convinced. After the outbreak of the French-Dutch War and the death of two of his political sponsors, Gottfried fell out of political favor and began searching for a new career.

In the meantime, Gottfried had been working on the beginnings of his theory of calculus. However, when he met with Isaac Newton in 1676, Newton accused him of stealing and copying his work on calculus. Though the two had independently come to the same findings, most sided with Newton. The allegations spread widely amongst academics, nobility, and lawyers, leaving Gottfried with few friends.

A few years earlier, he had been offered the post of Counsellor to the House of Hanover. Gottfried had ignored the invitation, as he considered Hanover boring and provincial. However, after his social position changed and he was unable to find any other political work, Gottfried reluctantly accepted. In 1677, Gottfried was promoted to Counsellor of Justice in the House of Hanover, which was a position he would hold until his death.

At court, Gottfried was provided with the academic and intellectual freedom to pursue any projects he wanted. He was also commissioned to write the history of the House of Brunswick, which he did in three gigantic volumes. Towards the end of his life, Gottfried angered King George I of Great Britain, who wanted him to complete a volume of his family history that he had commissioned Gottfried’s father to write over 30 years ago. Gottfried never finished the work, and when he died in 1716, no royals attended his funeral. His grave went unmarked for over 50 years.

One of Gottfried’s most controversial areas of study was calculus. Isaac Newton is popularly credited with the discovery of calculus, but it turns out that Gottfried was on the same road to the discovery of calculus almost simultaneously! During Gottfried’s life, his reputation as an academic was tainted by the allegations that he plagiarized his work on calculus from Newton’s papers. In the 1900s and beyond, researchers have gone to great lengths to prove that the two great mathematicians developed the same idea separately.

Gottfried also played a pivotal role in the invention of several early theories that would become the backbone of computer science. The most important of his innovations was the binary system--a language of 1’s and 0’s that can spell out computational commands. He imagined this binary language represented by a simple system of punched cards that could convey these complex ideas and computations. The modern computer runs on what is fundamentally a binary system, where different electrical signals are either 1’s or 0’s and give the processing system data or instructions to run.

However, Gottfried was uniquely talented in many other fields: making important discoveries in logic, topology, geometry, physics, law, and psychology, as well as translating literature from dozens of languages.

Remembering Leibniz Through the Ages

Gottfried Wilhelm Leibniz has remained a uniquely influential figure in mathematics and philosophy. Although he died relatively unknown, having lost favor with his rich and powerful sponsors, his work had been highly celebrated posthumously.

His mark on philosophy was especially profound and his influence on modern philosophers can be seen far and wide. Leibniz’s most enduring legacy is his idea of the “monad,” which he thought of as the building blocks of the universe. He described them as indivisible, continuously evolving, and present from the creation of the universe. He uncannily predicted many qualities of the later-discovered atom and even hypothesized that time and space were relative, prefiguring Einstein by hundreds of years.

This article is the sixth in our series exploring the lives and achievements of famous mathematicians throughout history. (Our last article was about the Hungarian mathematician Paul Erdös!)