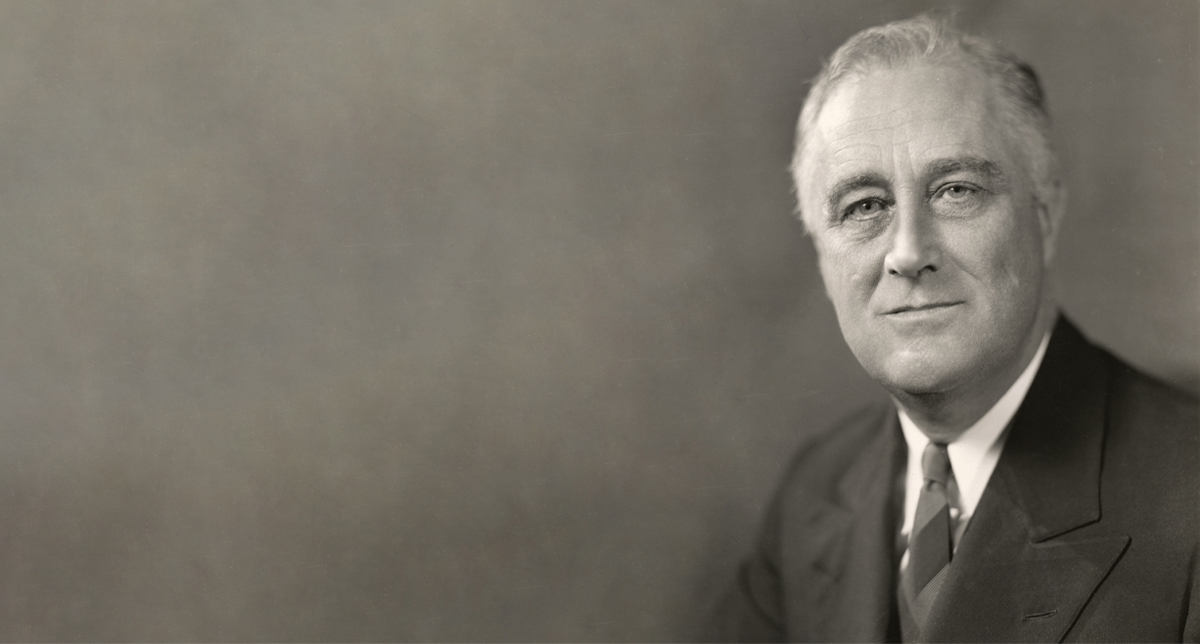 Franklin D. Roosevelt has a unique place in the history of U.S. presidents. He was the only president ever elected to office four times. He served during two of America’s most challenging eras of the 1900s: the Great Depression and World War II.

Even more impressive, Roosevelt did all of this while forced to rely on a wheelchair and leg braces after polio took away his ability to walk on his own.

Learn about Roosevelt’s passion for politics, his desire to improve the lives of Americans, and his lasting legacy of leadership during the most difficult of times!

Roosevelt was born in now-historic Hyde Park, New York, on January 30, 1882. His parents, James and Sara Delano, both came from wealthy families. Roosevelt had a comfortable upbringing. He had one older half-brother, James, whose mother passed away three years before his father married Sara.

Roosevelt’s early education was provided by his parents and private tutors. During his high school years, he attended the prestigious Groton School in Massachusetts. He enrolled at Harvard University in 1900 and received a Bachelor of Arts degree in history three years later.

Next, Roosevelt attended Columbia Law School from 1904-1907 but did not graduate. Instead, he took the New York State Bar Exam, passed it, and began practicing law without a law degree.

The Roosevelts reportedly first met at FDR’s Hyde Park home when they were toddlers.

They were married on St. Patrick’s Day in New York City. Theodore Roosevelt gave the bride away.

The Roosevelts had six children. Franklin Dr. Roosevelt Jr., their third child, died while an infant.

Roosevelt began his life as a public servant in 1910 when he was elected to the New York State Senate. This was a significant win. It was Roosevelt’s first time running for public office, and he ran as a Democrat in a historically Republican district.

While serving as a state senator, Roosevelt began supporting progressive reform. He, along with Eleanor, saw the huge difference in living standards between wealthy elites and poor working-class citizens. They sought to improve the lives of those struggling to make ends meet.

Roosevelt was reelected to the New York Senate in 1912, and he put his support behind then-presidential candidate Woodrow Wilson. After Wilson was elected, he appointed Roosevelt as Assistant Secretary of the Navy. Roosevelt held this position for seven years.

In 1920, Roosevelt was the Democratic Party’s nominee for Vice President of the United States. He ran on a ticket with James Cox. They ultimately lost, and Roosevelt re-entered private life and worked on multiple business ventures.

Roosevelt contracted polio in 1921 while on summer vacation in New Brunswick. Polio is a life-threatening condition caused by a virus that infects the spinal cord. It can cause paralysis.

Sadly, Roosevelt suffered from a severe case of polio. He was almost completely paralyzed for a period of time. He never recovered fully. For the rest of his life, he relied on crutches, leg braces, or a wheelchair.

While he recovered, Roosevelt asked Eleanor to keep his name and political aspirations alive in their New York spheres of influence. Eleanor became a gifted speaker and political strategist in her own right while supporting her husband.

Despite the long recovery from polio and resulting paralysis, Roosevelt never gave up on his political dreams.

In 1928, he ran for governor of New York. He traveled the state by car and worked to demonstrate his strength and vitality despite his medical condition. He also symbolized the ability to overcome serious challenges in life.

Roosevelt’s campaign was successful, and he was elected governor of New York.

One of his first actions was to introduce programs that lowered taxes for farmers and lowered the cost of public utilities. The popularity of his programs helped him get re-elected as governor in 1930.

Roosevelt then began campaigning for the presidency.

The 1932 presidential election hinged on which candidate Americans felt would help them out of the Great Depression. Incumbent Herbert Hoover did not appear very positive on the campaign trail. Roosevelt promised a New Deal to turn the economy around.

He didn't go into great detail on the plan. He promised his programs would help farmers, balance the budget, and regulate unfair business practices.

When he was inaugurated in March of 1933, the economy was in dire straits. Banks had shut down, production was just over half of what it was in 1929, and 13 million workers were unemployed.

During his inaugural address, Roosevelt declared:

“This great nation will endure as it has endured, will revive and prosper…the only thing we have to fear is fear itself.”

Roosevelt got to work on the New Deal. During the first phase, “The Hundred Days,” Roosevelt worked with Congress to restore confidence in the banking system. The government subsidized struggling farmers. It also introduced programs to improve working conditions and wages.

Roosevelt was also instrumental in the creation of the Securities and Exchange Commission (SEC). This protected investments. He also helped create the Federal Deposit Insurance Corporation (FDIC). This protected bank deposits.

Phase one of Roosevelt’s New Deal was considered a moderate success, but more work was needed to help millions of unemployed and impoverished Americans.

Phase two began in 1935. It included the Social Security Act. This provided financial support for workers who lost their jobs or became disabled and offered pensions to retired workers. It also put millions of people to work constructing roads, bridges, and other public infrastructure.

When World War II began in 1939, the United States took a neutral position. Members of Congress did not want to be drawn into a European conflict.

However, Roosevelt felt it was important to offer aid to Britain and France as they fought off German advances. As a result of his efforts, Congress voted to sell arms to both countries. After France fell to Hitler, Roosevelt worked to build up U.S. defenses and provide all aid possible for Britain.

Roosevelt was elected to a third term in 1940. In 1941, the U.S. was forced to enter World War II when Japan bombed Pearl Harbor.

One unexpected consequence of joining WWII was the full recovery of the U.S. economy, as war preparations put everyone back to work.

Roosevelt and Britain’s Winston Churchill coordinated attacks in North Africa in 1942, Sicily and Italy a year later, and finally, France on the famous “D-Day,” June 6, 1944.

Yalta Summit 1945 with Churchill, Roosevelt, and Stalin via Wikimedia.org

The Allies won World War II. Considered a powerful defender of democracy during the war, Roosevelt was elected for his fourth and final presidential term in 1944. However, his health had been failing for some time, and he was noticeably weak.

Suffering from advanced heart disease, he traveled to his cottage in Georgia for some rest in early April 1945. While there, he suffered a massive stroke and passed away on April 12th.

The country deeply mourned the loss of its beloved president. His legacy lives on in many of the programs and agencies he initiated that are still in place today.