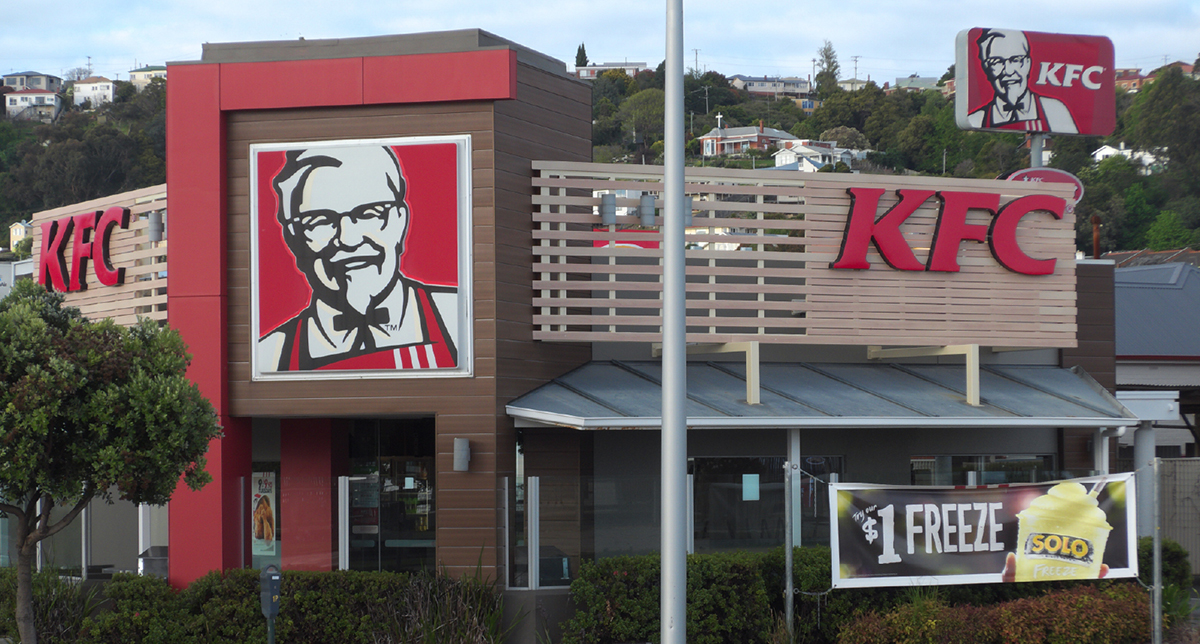 The Merriam-Webster definition of “persevere” is “to persist in a state, enterprise, or undertaking in spite of counterinfluences, opposition, or discouragement.”

The story of Colonel Sanders (born Harlan Sanders) is a remarkable story of perseverance in the face of tremendous challenges. Sanders’ father passed away when Sanders was just six years old. To help his family, Sanders learned to cook and watched after his young siblings.

Sanders dropped out of school in seventh grade and left home to work as a farmhand. This was just the beginning of a long list of jobs he held through the age of 40. Then he developed a fried chicken recipe that would change his life, but success wouldn’t come easy.

Learn how Sanders persevered through over 1,000 rejections to build one of the most famous fast-food chains in the world!

Sanders was born on September 9, 1890, in Henryville, Indiana. His parents, Wilbur and Margaret, owned a farm a few miles outside of town.

Wilbur passed away when Sanders was six. Margaret had to work long hours sewing and peeling tomatoes in a canning factory. Sanders was left to cook and care for his younger brother and sister.

In 1902, Margaret remarried, and the family moved to Greenwood, Indiana. Unfortunately, Sanders’ new stepfather didn’t like children. Sanders’ little brother was sent to live with an aunt, and Sanders was shipped off to be a farmhand.

In seventh grade, Sanders dropped out of school to work full-time.

At age 15, he moved to New Albany, Indiana, where his uncle lived. He began working as a streetcar conductor.

When he was 16, Sanders lied about his age to join the army. He served in Cuba for a few months and was honorably discharged. Interestingly, he did not earn the rank of “Colonel” while in the army. That would come later.

Sanders moved to Alabama to live with a relative after his military service ended.

The next phase of Sanders’ life would be just as chaotic as his childhood, but it would teach him resilience (which he’d need to launch his chicken business!).

After serving in the army, Sanders began working as a laborer on the railway. He also aspired to be a lawyer, and he began studying law at the same time. He ended up earning a law degree through a correspondence course.

Sanders was fired from the railway after getting into a fight with a fellow rail worker. He began utilizing his law degree, practicing law in justice-of-the-peace courts in Alabama. Sadly, his career was cut short after he engaged in a courtroom brawl.

Sanders next worked as an insurance salesman until he was fired for insubordination.

In 1920, he founded a ferry boat company with a steamboat that traveled across the Ohio River between Kentucky and Indiana. This venture was fairly successful, and a few years later, Sanders cashed out to start his own acetylene lamp manufacturing business.

Sadly, this business failed when a competitor made a better version of his lamp. It wasn’t until 1930, when Sanders was 40 years old that he hit upon the chicken dish that would change his life.

In 1930, Sanders was operating a service station in Corbin, Kentucky. He came up with the idea of selling simple dinners to travelers. His lifetime of cooking experience paid off. His delicious meals of pan-fried chicken, ham, string beans, and biscuits were a hit.

Interestingly, this was also around the time that Sanders became a “Colonel.” In 1935, Kentucky Governor Ruby Laffoon commissioned Sanders as an honorary colonel.

Word spread around the region, and in the late ‘30s, Sanders opened his own restaurant.

During this time, Sanders was working hard to perfect his chicken recipe. He found perfection in a secret blend of 11 herbs and spices, which are still used today.

He also needed to find a way to cook meals more quickly. A pan-fried chicken dinner took 30 minutes. Sanders discovered that a pressure cooker could cut the time down to nine minutes.

The seeds of Kentucky Fried Chicken were planted. But seeing them grow would take a lot of patience and nurturing.

When World War II ended, Sanders began working to sell franchises of his chicken business. He was in his 50s by this time.

His delicious recipe was rejected 1,009 times! He had over a thousand rejections, yet he didn’t quit. He knew he had a successful idea on his hands.

Finally, Sanders made his first sale in 1952 to a restaurateur in Salt Lake City, Utah. His recipe was named “Kentucky Fried Chicken,” and it was a hit.

At the same time, Sanders was operating his own successful cafe, and he thought he’d finally made it. But as luck would have it, a new interstate was built in the area. The freeway bypassed Sanders’ restaurant altogether, and travelers no longer stopped by for his famous chicken dinners.

In 1956, Sanders was forced to auction off his business at a loss. Fortunately, the franchises had started taking off by then, so Sanders (at age 66) focused full-time on expansion.

He would travel from restaurant to restaurant, offering to cook his chicken for restaurant employees and patrons to prove he had a winning recipe.

By 1960, Sanders’ franchising business had grown to over 200 restaurants. Just three years later, he had amassed over 600 franchises in the United States and Canada, more than any other fried chicken brand.

In 1964, at the age of 74, Sanders sold Kentucky Fried Chicken for $2 million. He remained the spokesperson, and his face and likeness still appear in the company’s logo.

Colonel Sanders signing an autograph for a fan, via Wikimedia.org.

When Sanders passed at the age of 90, he was the founder of one of the most successful and innovative fast-food chains in the world.

Remarkably, his secret recipe is still a secret and is still used at KFC restaurants today.